It’s the start of a new decade, and what better way to star with 2020 than redoing the whole map! Again! if you’re no stranger to Snacko devlogs, you’re also no stranger to map remakes. This time, though, it’s for real. We’re saying this because we also changed the art style, but also because we won’t have any time left to make the rest of the game if we keep remaking the map. So yeah, we promise, last major change.

🎨 Why are we changing the art style?

For a number of reasons. The main reason is that we felt like all the assets lacked consistency. Most of the assets were made over the span of many Snacko reworks, and the result was a very Frankenstein’d look. It wasn’t terrible, but it could be better. After talking over it for a while, we decided the best thing to do for the game was to nail down a solid art direction and stick with it for the remainder of the project. The problem with this was that it was going to take a long time (it took me the whole month…), and that this was likely going to be the last big change we were able to make before running out of time. If we want to hit our 2021 release goal, we had to be 100% sure of where we wanted the game to be, and to hit that target every step of the way going forward. No pressure! 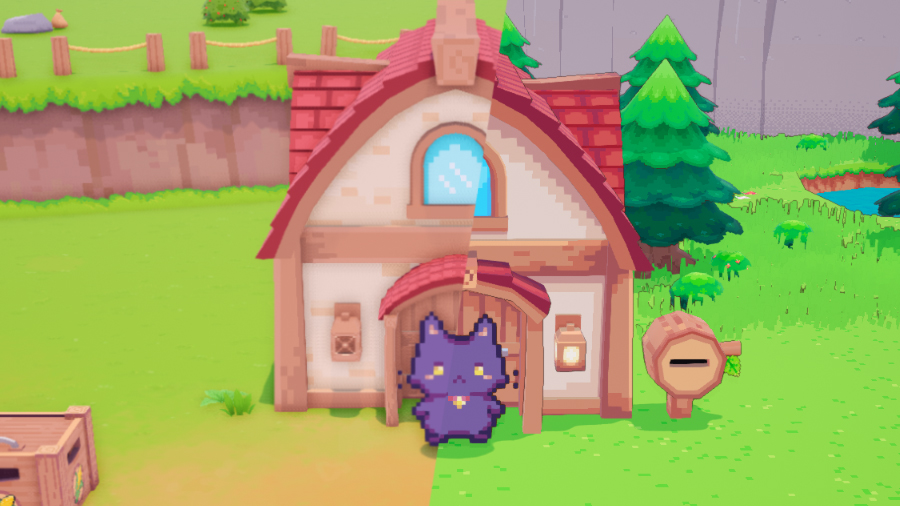 My initial inspiration for Snacko’s art style mainly came from Pokemon Diamond/Pearl and Legend of Zelda: Minish Cap. I felt like the longer the project went on, the farther I was from hitting those targets. The game was really low contrast, the colors were a little muddy, and the pixel consistency was off. After putting together a board of a bunch of Minish Cap images and Pokemon D/P screenshots, I went to work creating a tiny scene that would help me figure out how the rest of the game was going to look. After 3 weeks of work and a lot of help from friends Sully (@artofsully) and Sam (@samfbrumby), and of course, my husband and co-dev recursive, we finally landed on a spot that made Momo’s chunky sprite fit in with the environment. Although there’s still a lot of work left to do, you can see some of the big differences in the before and after screenshots below: 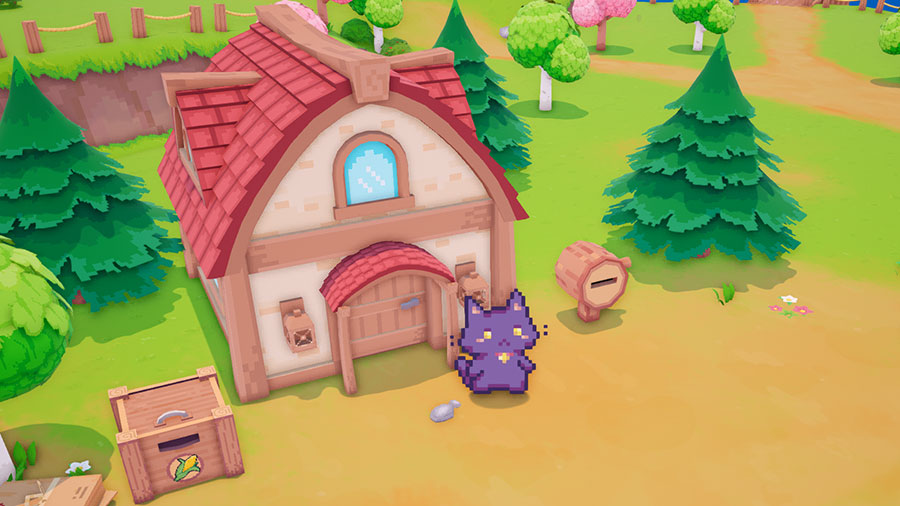 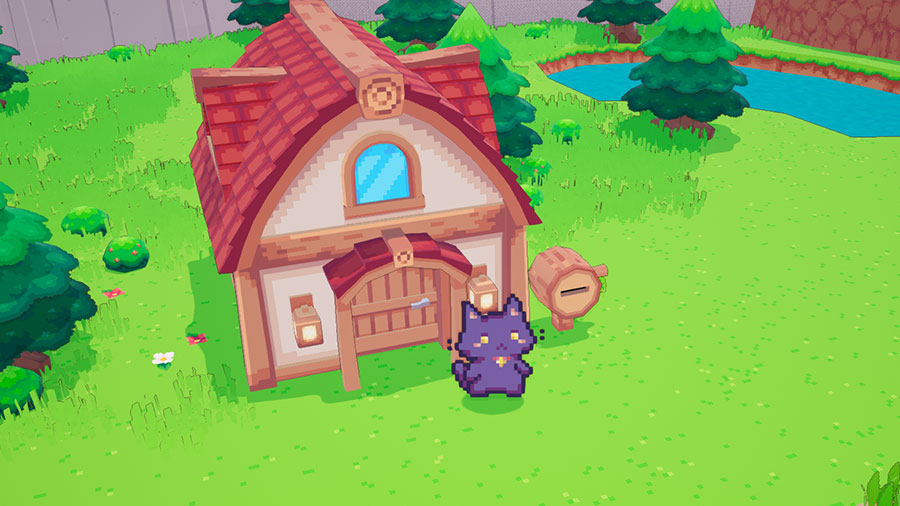 We feel like this new direction is a lot brighter, livelier, and easier on the eyes. We hope you like the change, too! What do you think?

After mulling it over, we still miss having a paw-print design for the world map. It’s a little cheesy, but we think it’s cute. After looking at different variations, scribbling in MS Paint, I think we’ve come up with a better layout than before. This new world map retains the shape of a paw print, without making any one part of the map feel too far from the rest. We’ll be adding forms of fast travel into the game at a later date to help with that, too. Our old map suffered a simple problem: it didn’t fit right. Instead of streaming levels, we had chunks that be one level, and another that would prompt a long loading screen. A few months ago, we changed this, and started streaming the entire game. There was negligible performance impact, but now you no longer had to sit through long load times between certain regions! It was great that the gameplay was smoother, but now the world felt….cut off. The ways that one place connected to the other didn’t make sense, and rightly so. After all, they didn’t connect properly anyways, so why would it make sense? You can see an aerial view of the farm map from our old layout below: 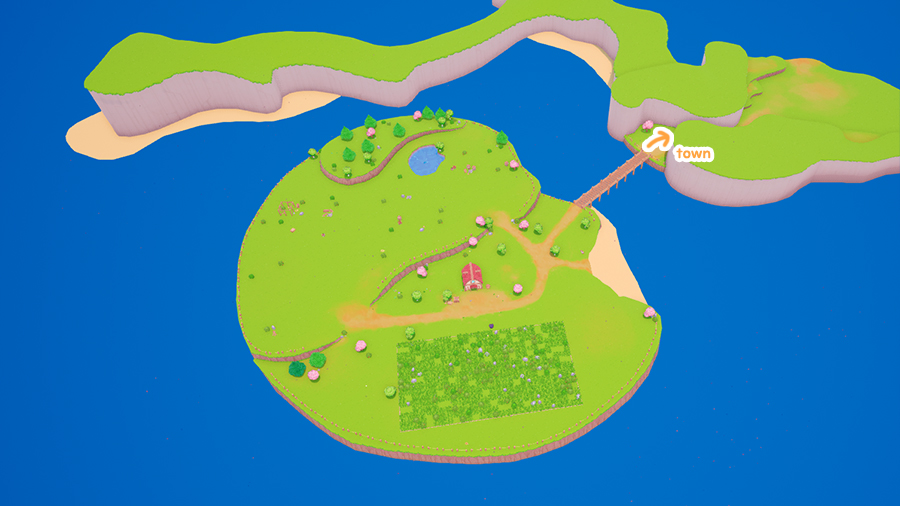 It’s a little dubious, huh? Just…an island in the middle of nowhere, surrounded by…spaghetti. We also didn’t like how there was only one way in and one way out. Part of our goals with Snacko is to give the player as much freedom as we can, so limiting how you can get around the world by giving you one way out of your farm felt sad. The map was also very flat, which made the world look bland once we implemented our new camera controls two months ago. Below, you can see the new farm area with a lot more vertical variation, as well as sectioned off areas. We wanted players to be able to unlock a second part of their farm as they progress through the game, and be able to grow more crops, place more decorations, or build more barns for pets. It’s still not done yet, so please excuse the mess: 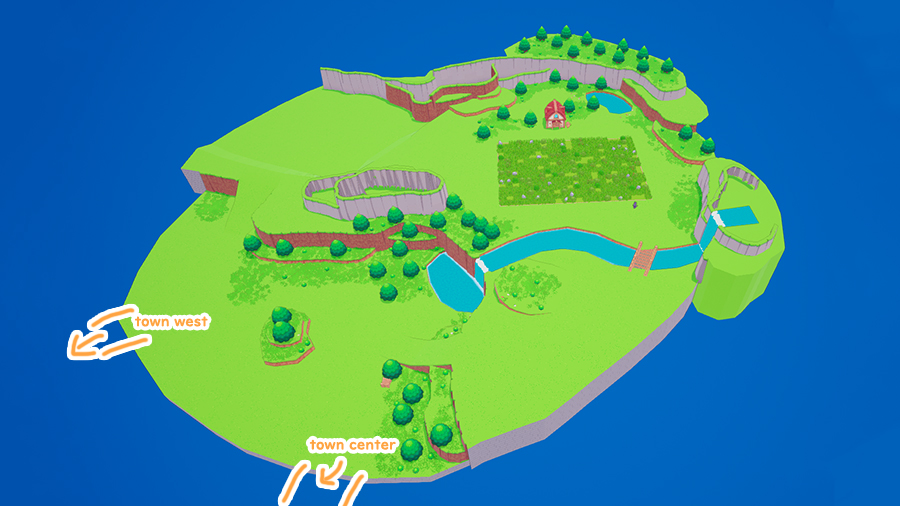 Since we’ve also changed how the player can now choose where to place their house, it no longer made sense to plop the shipping container in a static spot where the static house used to be. So, we’ve moved it closer to the way to town to save Mikan some legwork, and also so that the player doesn’t feel like there’s a right or wrong place when it comes to where to plop down their house. To make sure each location flows nicely to the next, this time we made sure to decide on a world map layout first, before working out the details of each region. I figured out quickly that for whatever reason, I preferred working with the stock Paint program when sketching out ideas, so that’s where most of these scribbles came from. After we decided on the overall shape and flow of the world map, I went in and did a little outline on where paths would go, and major landmarks would settle in the region. The drawing below is of the world map and the first farm area: 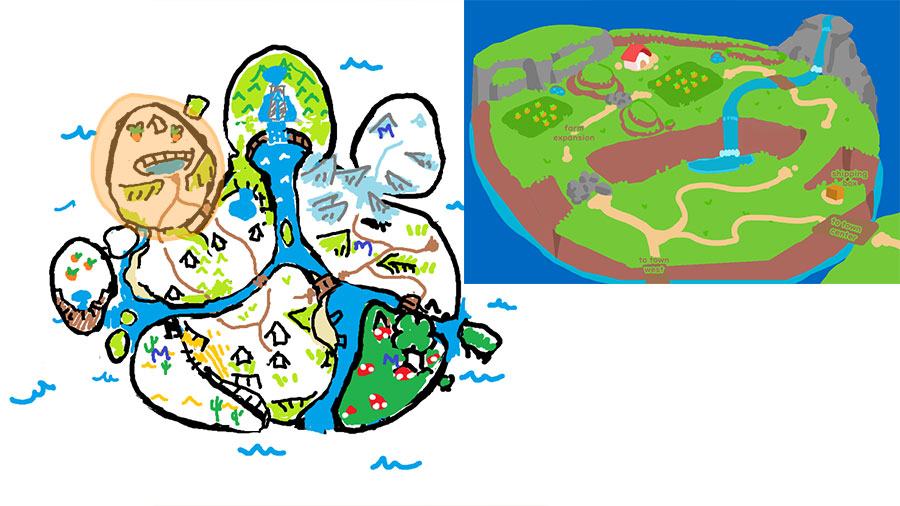 I tried my best to recreate it in 3D! Some things were changed in the modelling phase, as I try to run around the map as much as possible at every stage to make sure it doesn’t just look nice, it plays nice. I ended up tweaking little things like cliffs and elevation, but it’s pretty much still the same layout as the sketch. But enough about the map, what else have we done this month?

Our last pre-alpha update, the build had the skeleton of what we wanted Snacko to be. It had building, letter writing, some NPCs, some stores, and some crops. It was nice, but there was nothing tying it all together. There was no sense of progression. Progression can mean many things: unlocking new furniture, meeting new villagers, growing new crops, and developing relationships. Part of it is also feeling like you’re improving and getting better or more efficient at the tasks you do every day. To reward players for sticking to it, we’ve added a skill system. Doing certain tasks will give you experience points, and leveling up will unlock perks for different actions. All of this can be tracked in your Journal at any time. The Journal will also track fun little tidbits like how many crops you’ve harvested, how many pieces of debris you’ve cleared, and other fun statistics like that! It’s still not done yet, so it’s looking a little rough around the edges, but it’s exciting! 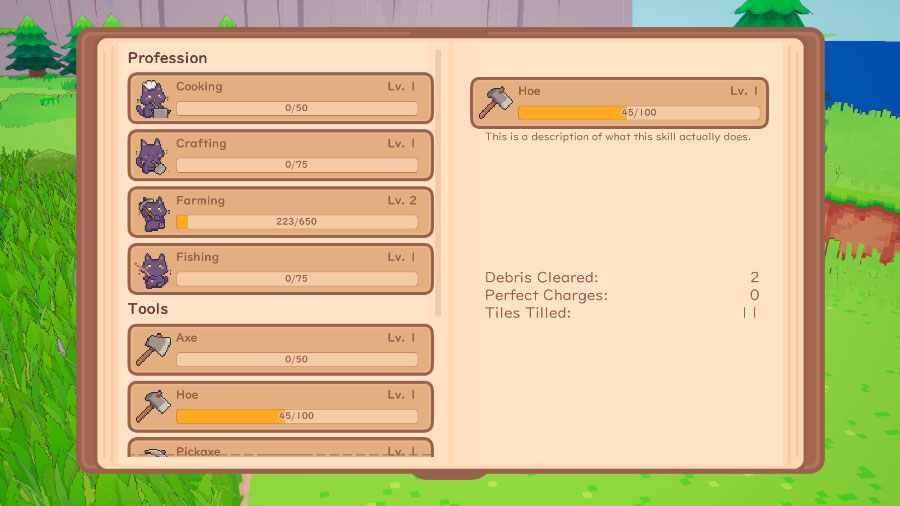 recursive spent a lot of time this month planning out and designing this system, and a lot of this was just done with spreadsheets. Is it fun? Apparently, according to him, but I don’t know… 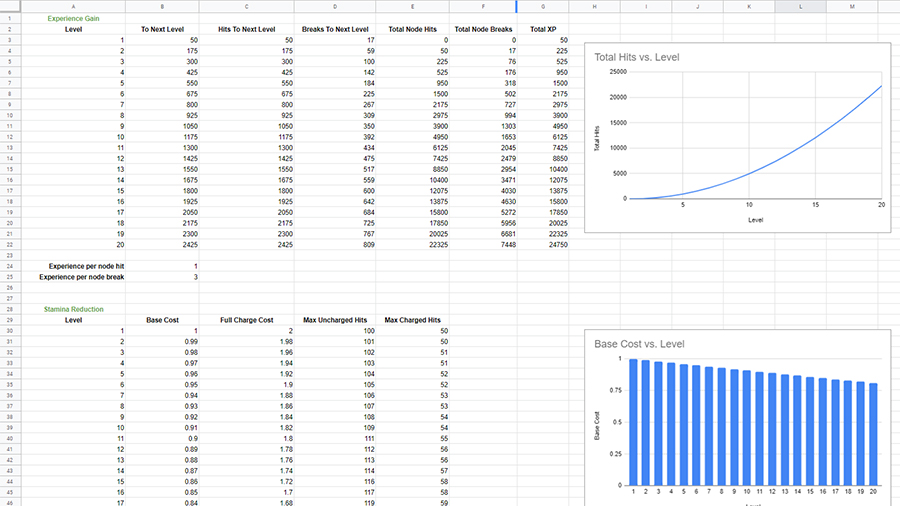 Anyways, that’s all from us this month! We got sick the last week, so we haven’t been able to work as much 💦

Thank you for reading, and thanks to all our patrons that have supported us to make this all possible!