November has been a wild month! The love and support Snacko receives never ceases to warm our hearts and make our day. This month, we released our first official pre-alpha update! Before this, we had a very, very old build of Snacko available for our $10+ patrons to enjoy. I say enjoy, but it was an outdated build that didn’t reflect the current state of Snacko. To give you an idea of just how old the available build was, it looked like this: 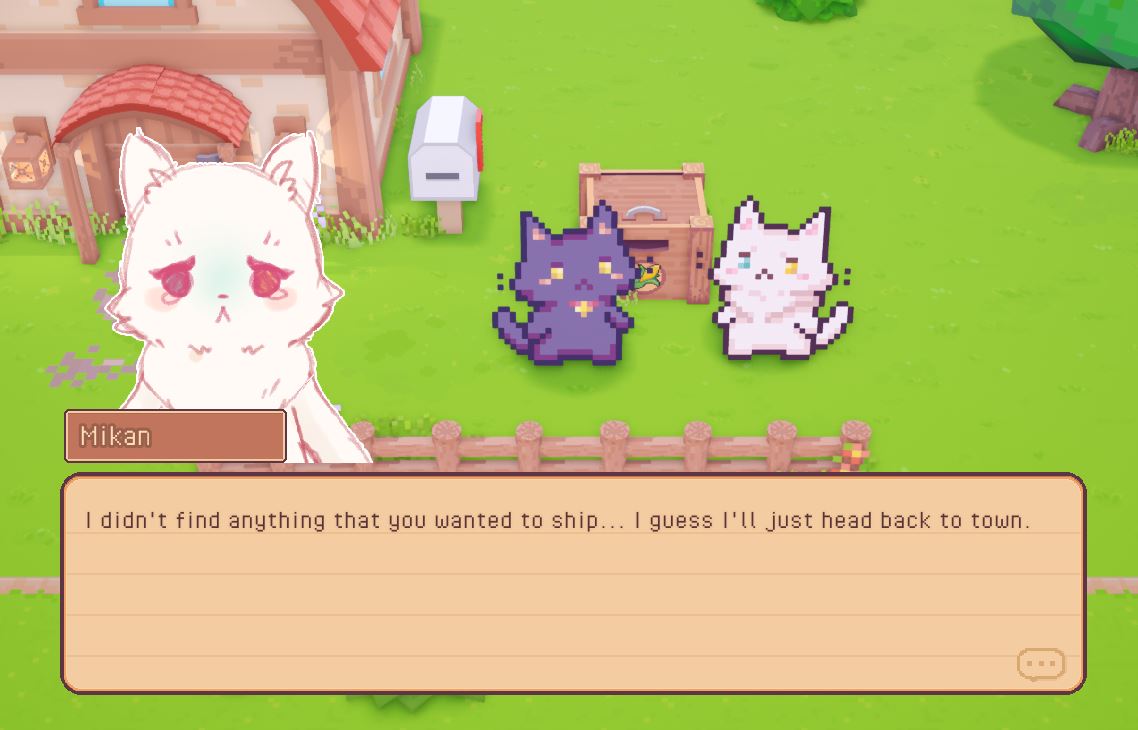 …Yeah. In a lot of ways, Snacko has changed a lot since mid-March. Even though we spent a lot of time this month playtesting and bug fixing, we still added in some new things!

Each villager will have their own preferences on what kind of house they’d like to live in, and how they would decorate it. Some villagers don’t mind as much, so you can change the exterior look of their home. Now, you can dye the roof of your own house, and a few of the NPC houses as well. 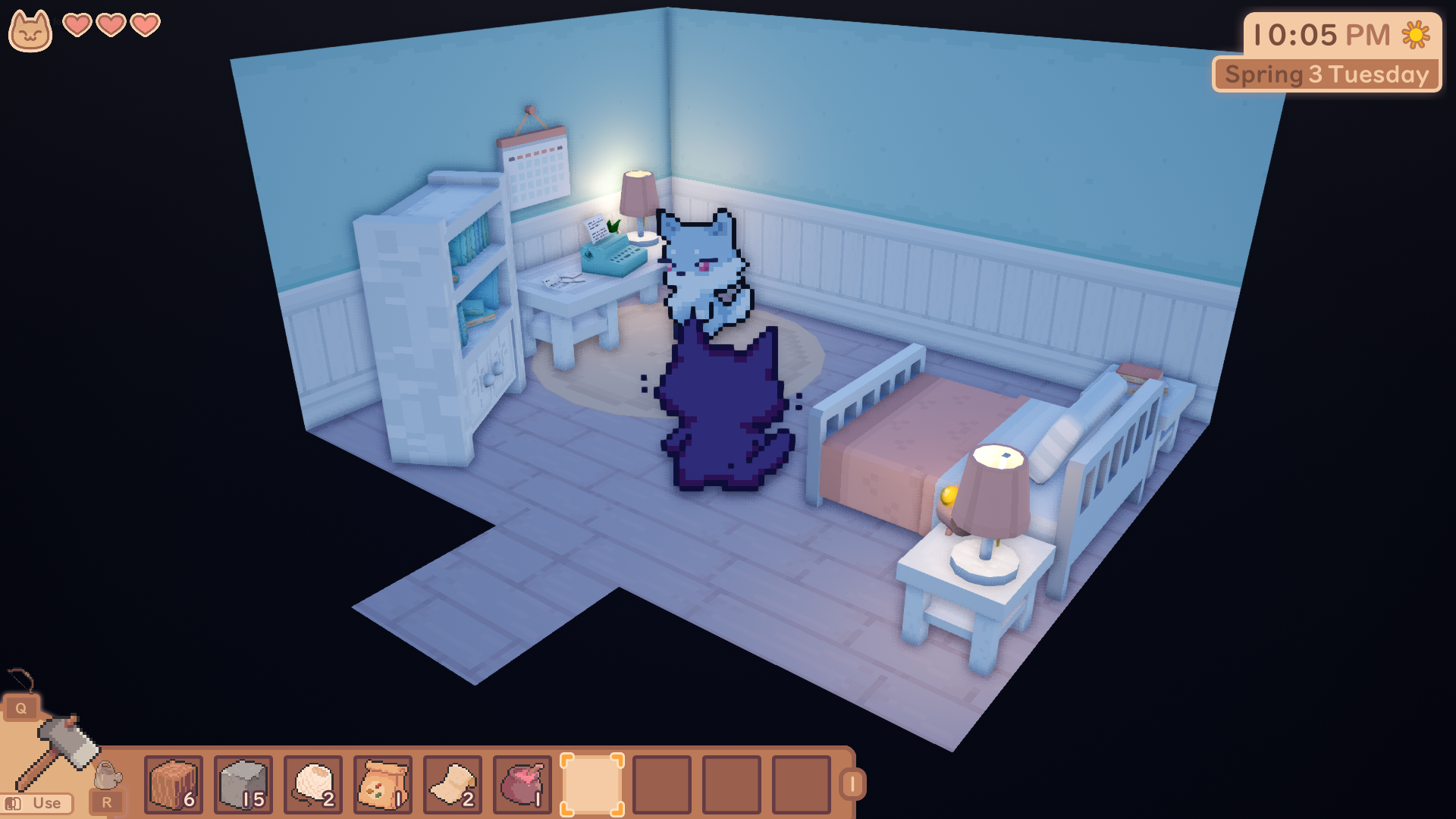 Now, it’s also easier than ever to find who’s where. Your mini-map and world map will show everyone’s locations. 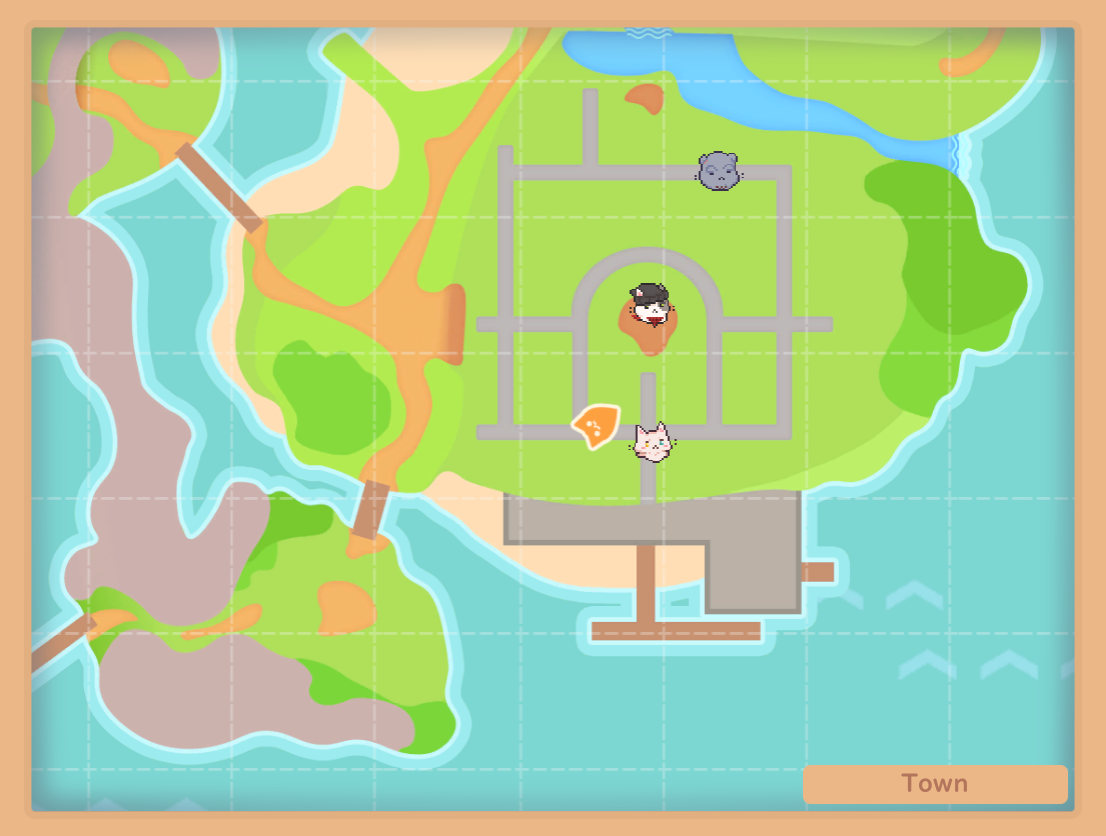 Some visual elements of Snacko were given a slight face lift in November! One of the most obvious ones is the sky! Like the smooth day-night transition, the sky will also blend between different color schemes depending on the time of day. The clouds move slightly at different speeds, if you just want to stand on your farm and watch them. 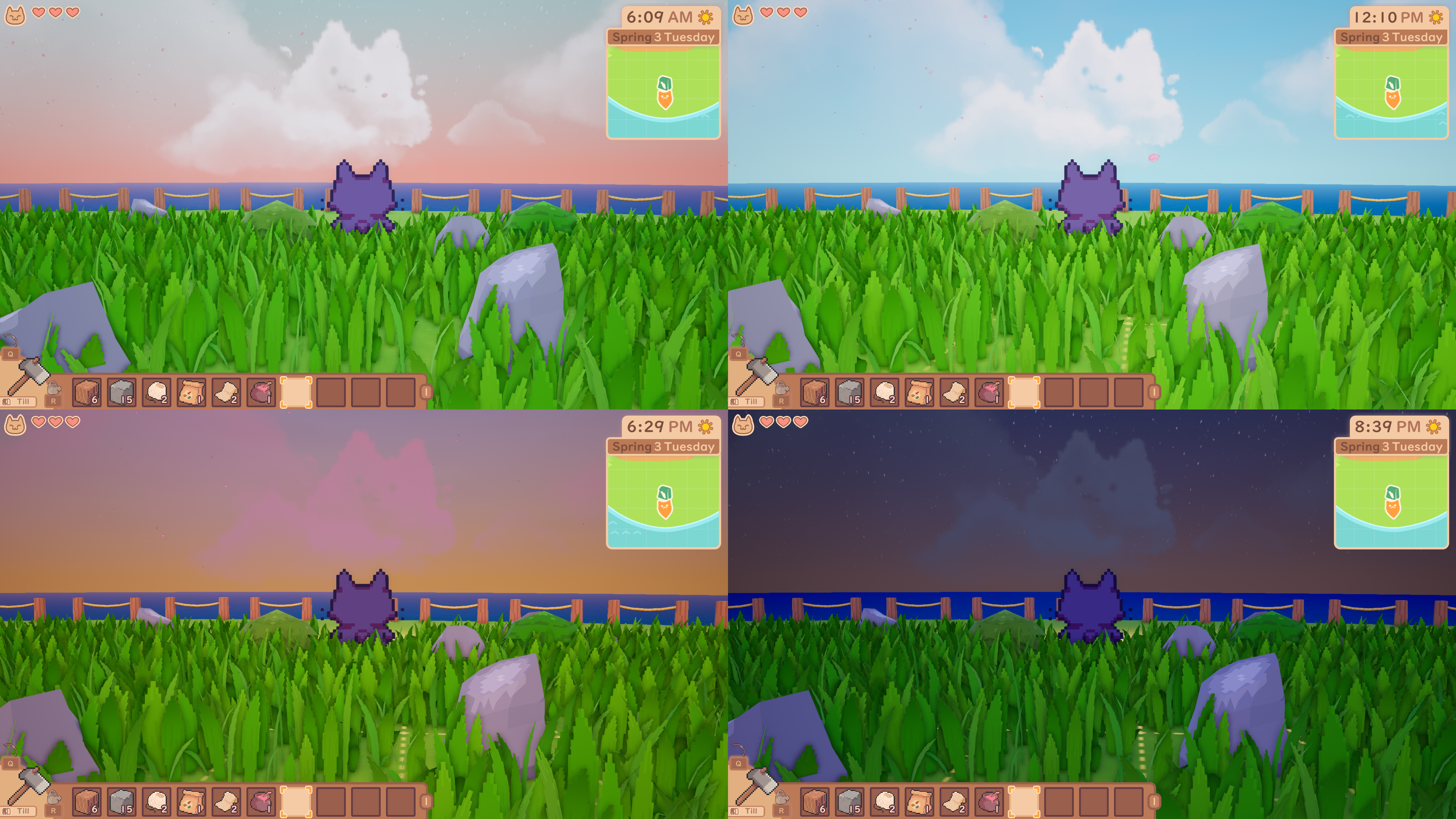 Is that a cat-shaped cloud? Yes.

Did you notice something funny with the camera angle? You can now also tilt the camera up and down, in addition to rotating it! Of course, you can disable this in the settings, if you’d prefer to play with a fixed camera. Along with the option to hide the HUD, it’s easier now to take the perfect screenshot of your farm.

Another visual change is the tile indicator. We think it fits the aesthetic of Snacko a lot better now! The new one is on the left, the old indicator is on the right.

And, drumroll please, weather! Finally! There’s now a chance it will rain. The rain will automatically water all your crops, so while you might hate getting wet, at least you don’t have to tend to your farm. This month, we’ve also brought on an extra set of hands to help with visual effects. Ken Visudharomn has been helping us make fun visual sparkles to make the game look more alive!

Building tile indicators have also changed to make it less intrusive. Borders now glow when you have a buildable item selected in your hotbar, so you don’t have to run around and guess where you can place something. The tiles around it help give you an idea where the grid is, without covering the whole map and contributing too much visual noise. It’s always just larger than the item itself, so it’ll scale depending on what you’re trying to place. This makes snapping fences and snap to grid mode a lot easier to use.

Some smaller changes include the next and previous equipment being shown on your toolbar so you’re not blindly shuffling through your equips, and also little touches like the player now sleeping on the bed instead of just fading to black. 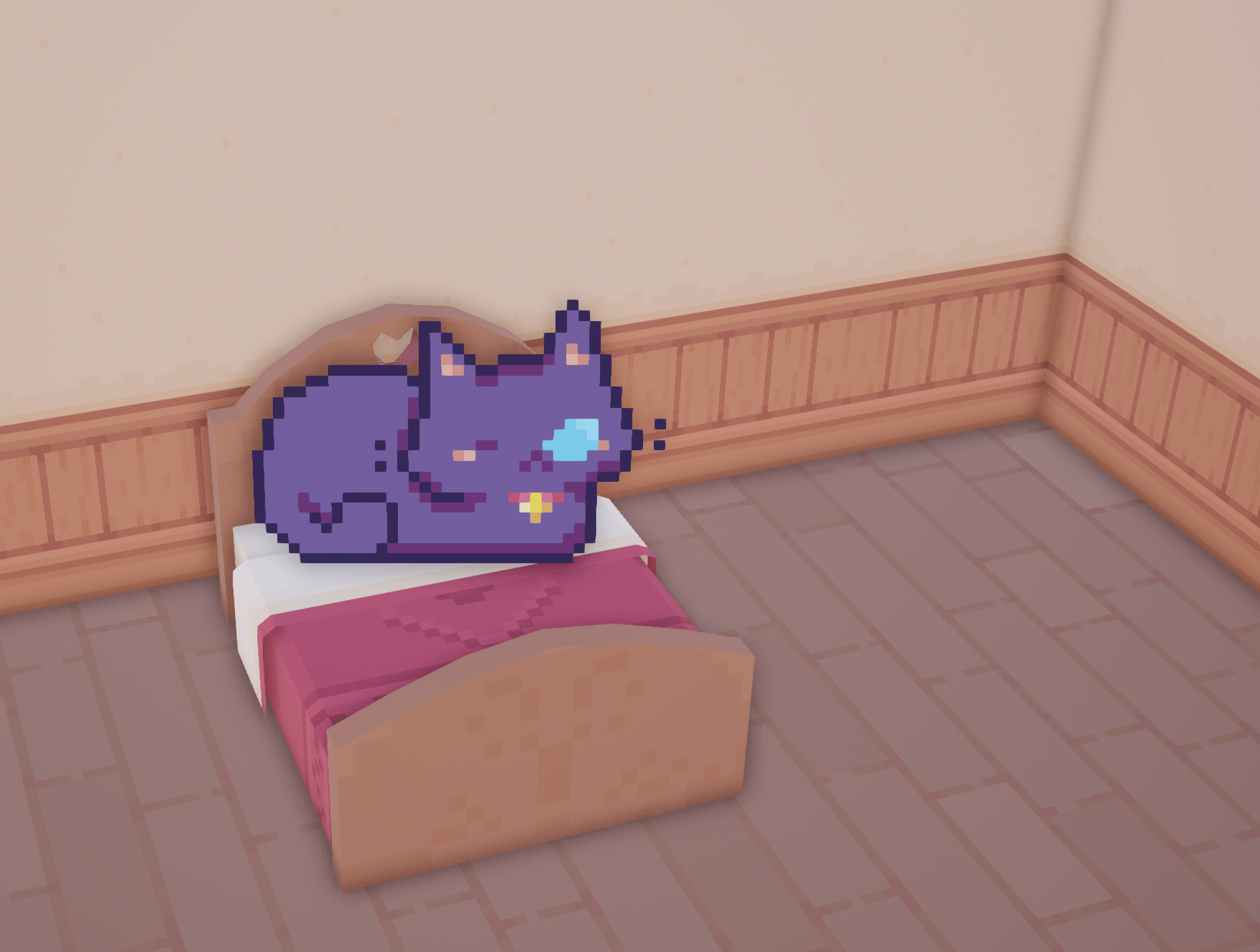 Tools can now be charged to have a better effect, for the trade off of costing a bit more stamina. At the moment, you can’t upgrade your tools yet, but we’d like to add upgrades to everything so you have to work less as time goes on. For now, the hoe, watering can, axe, and pickax can be charged for a stronger swing. The hoe and watering can will cover more tiles, while the axe and pickax will make it faster to break debris.

Speaking of debris, your farm will no longer be the only place where it’s messy! We thought it was strange the town was so clean, seeing that it has been abandoned for quite some time. Now, at the start of the game, the town will have littered cardboard boxes, crates, small sacks with dubious contents, and other little knickknacks you must clear before you can use the space. It’s not thankless labor, though! Breaking the debris will yield valuable resources and materials like cotton cloth, small seeds, and stone. 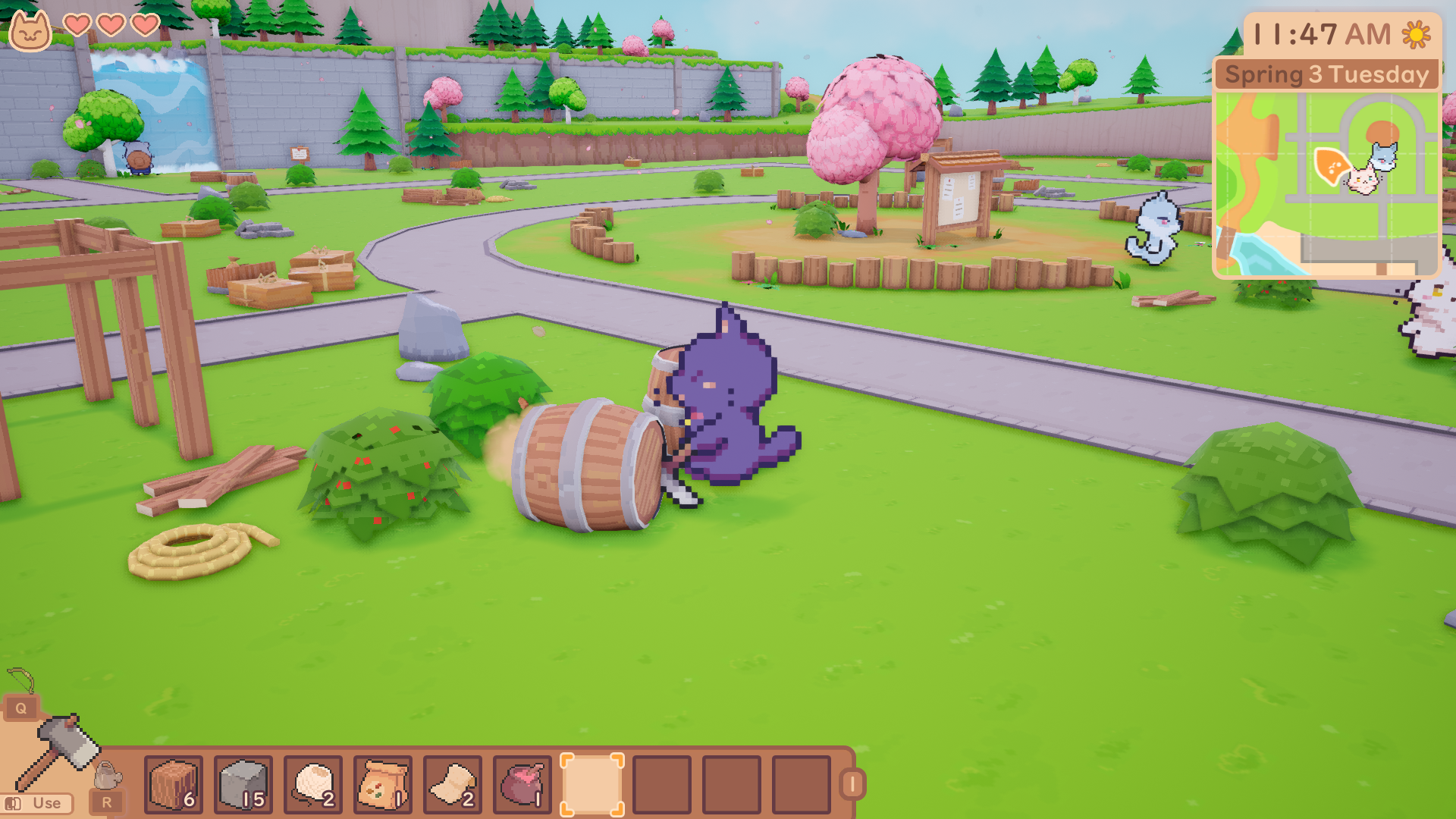 What’s the use of all this customization without content? We’ve been slowly adding furniture, foods, and fish as well! The catfish, salmon, and haddock make their entrance as the three new fishies you can catch in different parts of the map. The salmon has a higher spawn rate near the waterfall, while you’ll never find the catfish anywhere but in ponds. To celebrate the event of more delicious catches, we’ve also redone the fish icons. We felt the old icons were too stiff, and looked awkward standing straight up in your inventory. Here are just some of the ones we’ve redone: 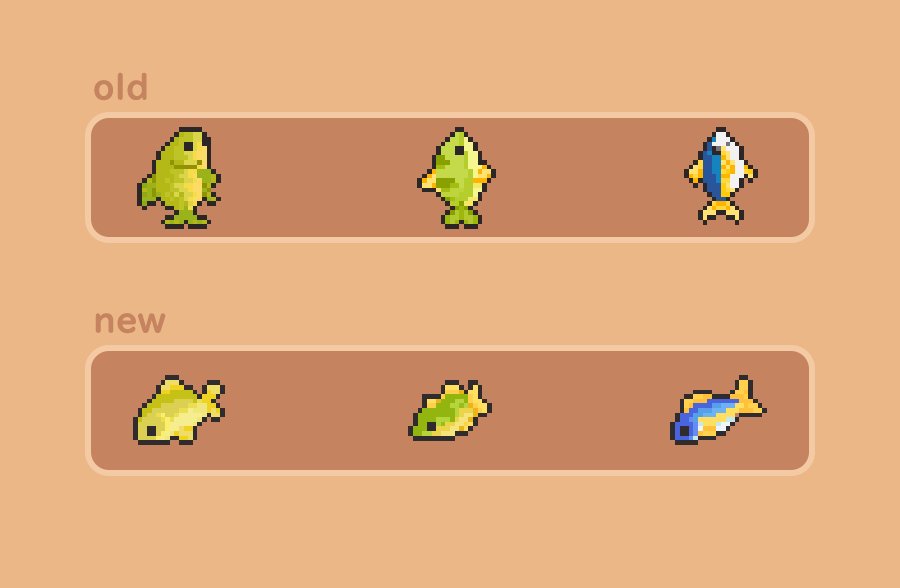 You used to only get wood and stone while clearing your farm. That was a little boring, and we were also lacking dye recipes. Clearing tall grass on your farm now has a chance to yield different colored petals, which can be crafted into dyes, or grass seeds, that can be used to cover up oopsies while tilling your field. Some bushes will even yield wild berries, which are a quick way to restore a tiny bit of stamina. Or, you can save them up, and make some desserts or smoothies. 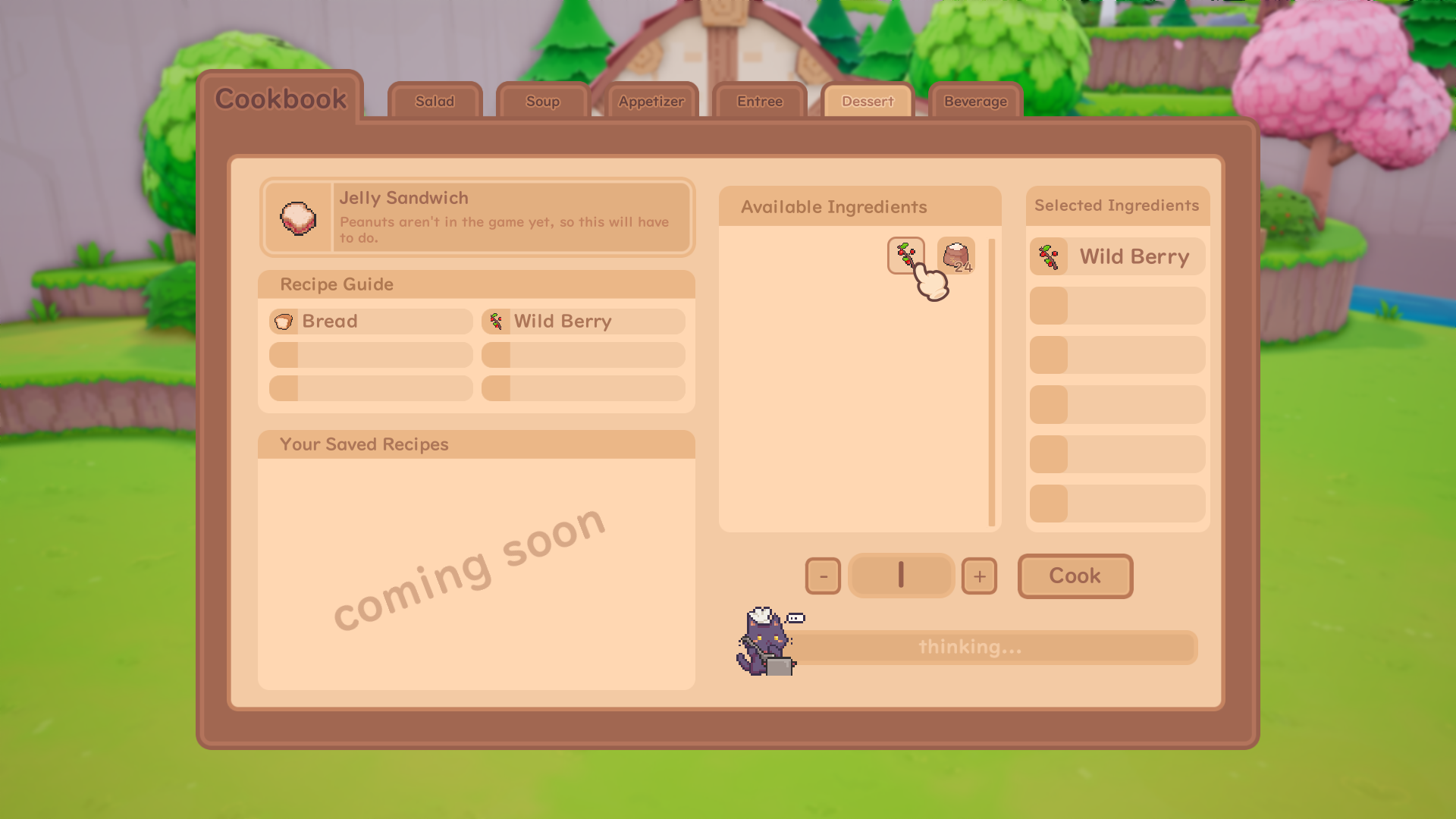 In addition to the new things you can find in the wild, we’ve finally added in different crop growth stage harvesting. For things like bamboo plants and onions, you can harvest them at earlier stages for a different item. Bamboo shoots and green onions go well in ramen! 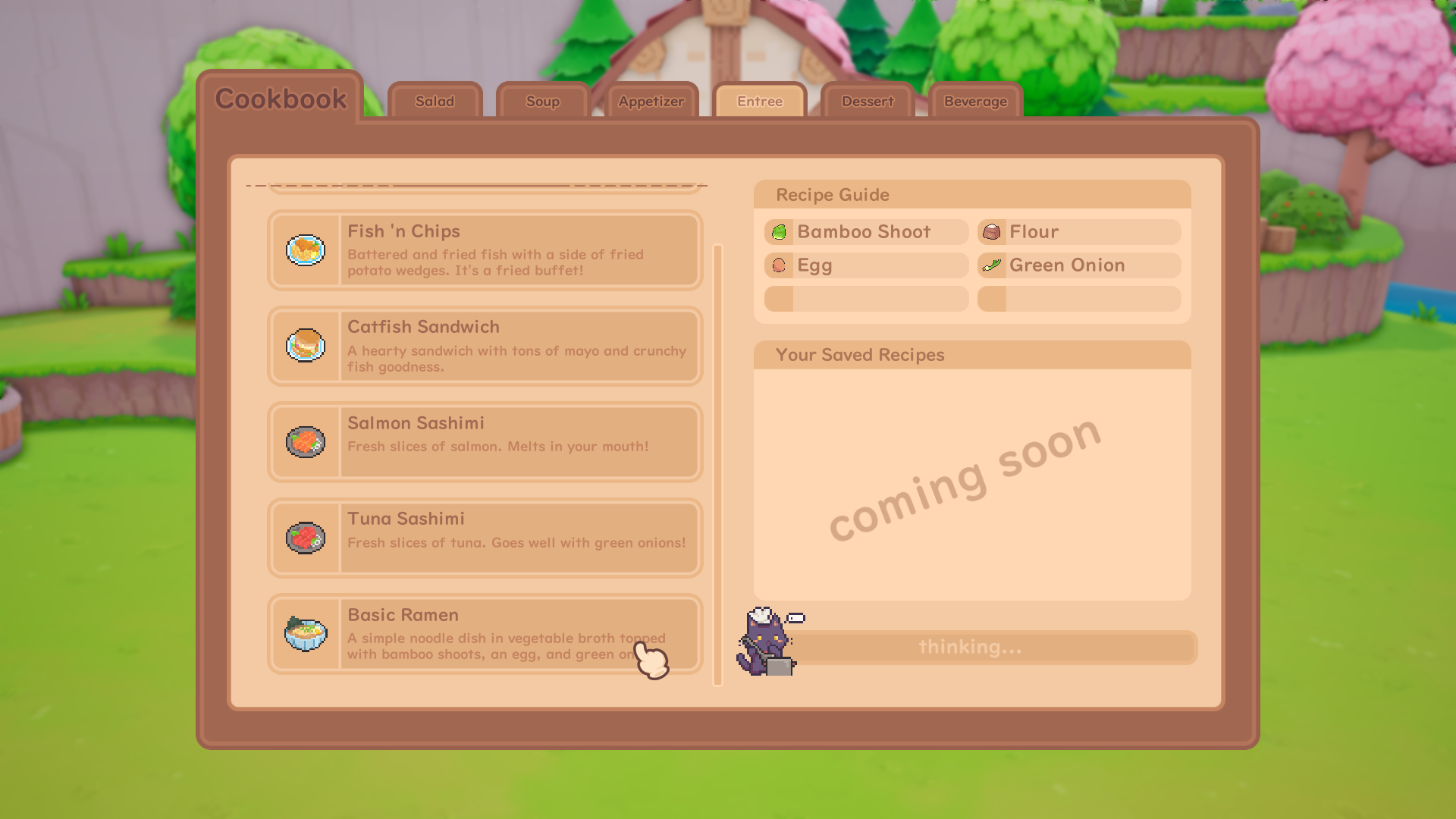 One of the things that was missing in the original build was any sort of player on boarding. You were dropped into the game with absolutely no tutorial, no backstory, and no explanation for any of the features. This time, while we didn’t have time to implement quests or tons of backstory, we did finally get a chance to put in some simple cutscenes that establish the setting, help explain some of the mechanics, and nets the player a starter set by the end of everything. 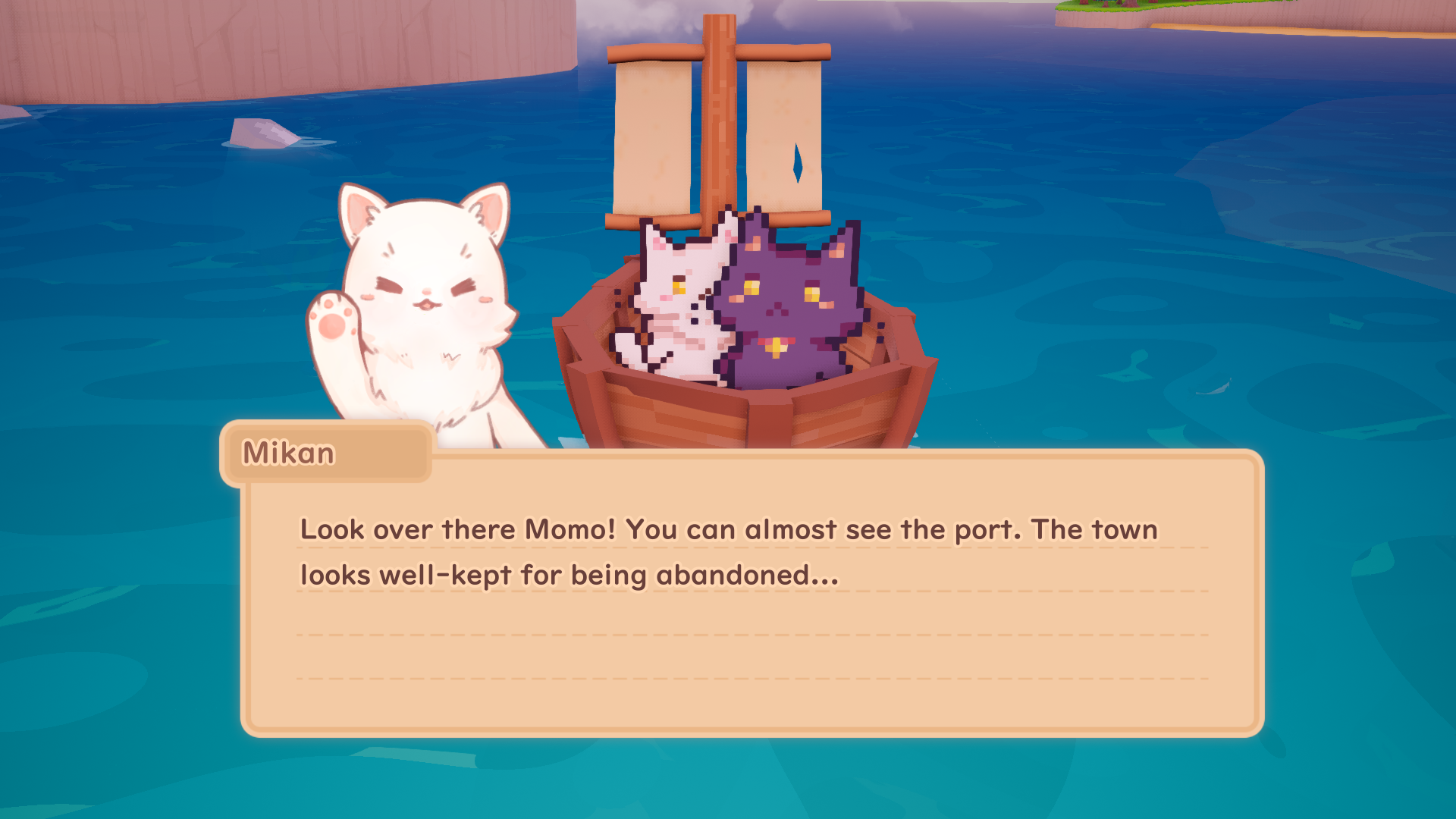 You’ll start off a new game with Mikan in a boat, sailing towards this mysterious abandoned island. On arrival, old man Nobu will come and scold you for coming to such a dangerous place. Upon hearing that you two don’t have a plan B, he lets you stay with the agreement that you will work for yourself. Through this, Nobu will be providing you with some basic tools, some seeds, and even a spare house! A combination of dialogue and tutorial popups this time around help new players learn the basics of Snacko, but in the future, we’d also like to implement quests to help teach the mechanics without having to sit there and listen to Nobu flap his lips. 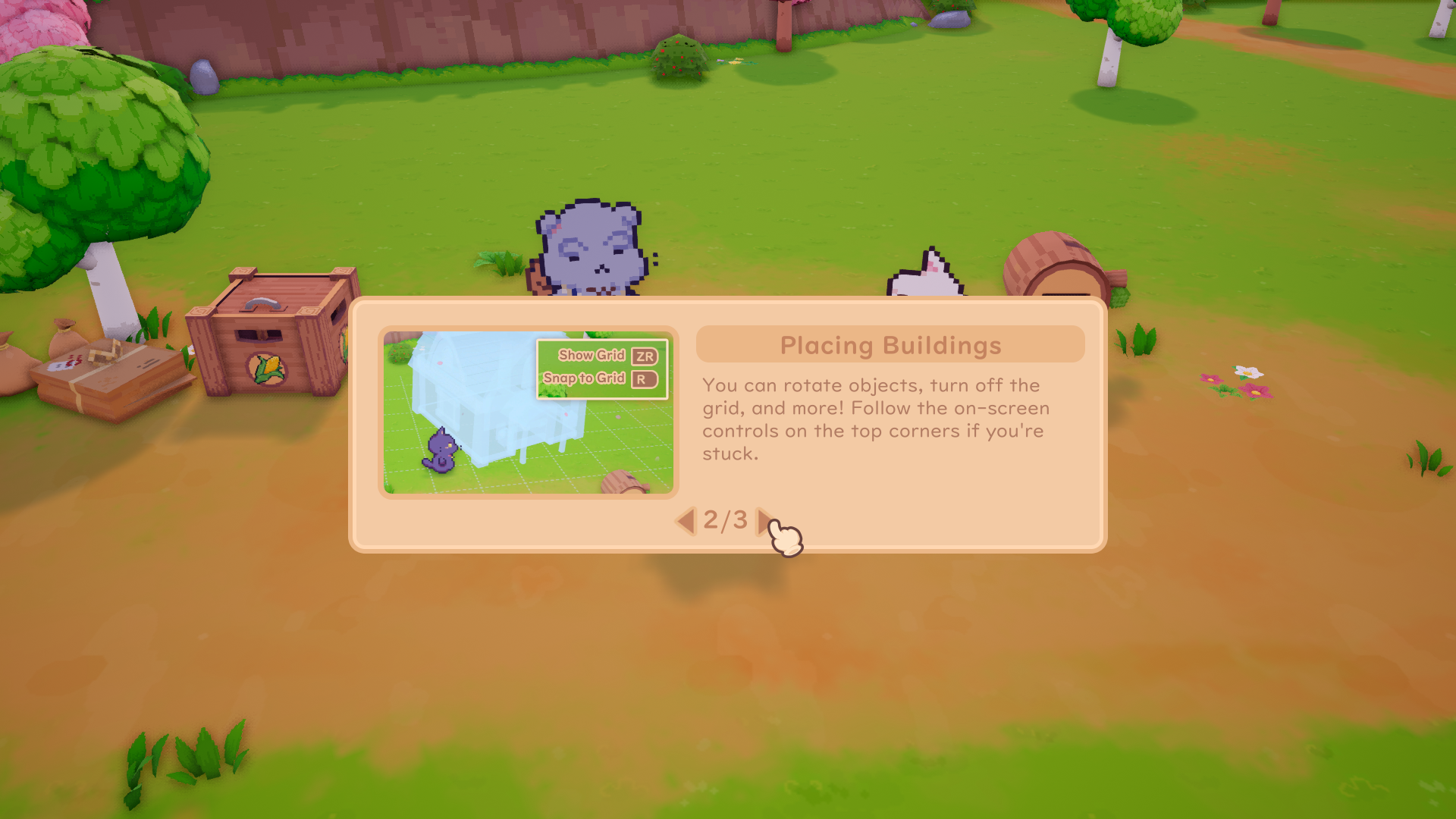 Outside of the few tutorials that pop up during the first few days, you can also read up on anything you may have missed, or a few extra tips for players who may not be familiar with farming games. Luckily, Nobu gifts you a bookshelf on your first day on the island, and it can be easily accessed.

Our next  major patch will be focused around mines with floors to explore, and better combat and enemy interactions. This is all for the month of November, so we’ll be seeing you next month close to the new year!

As always, thank you to all the amazing patrons that help make full-time Snacko development more sustainable for us ? 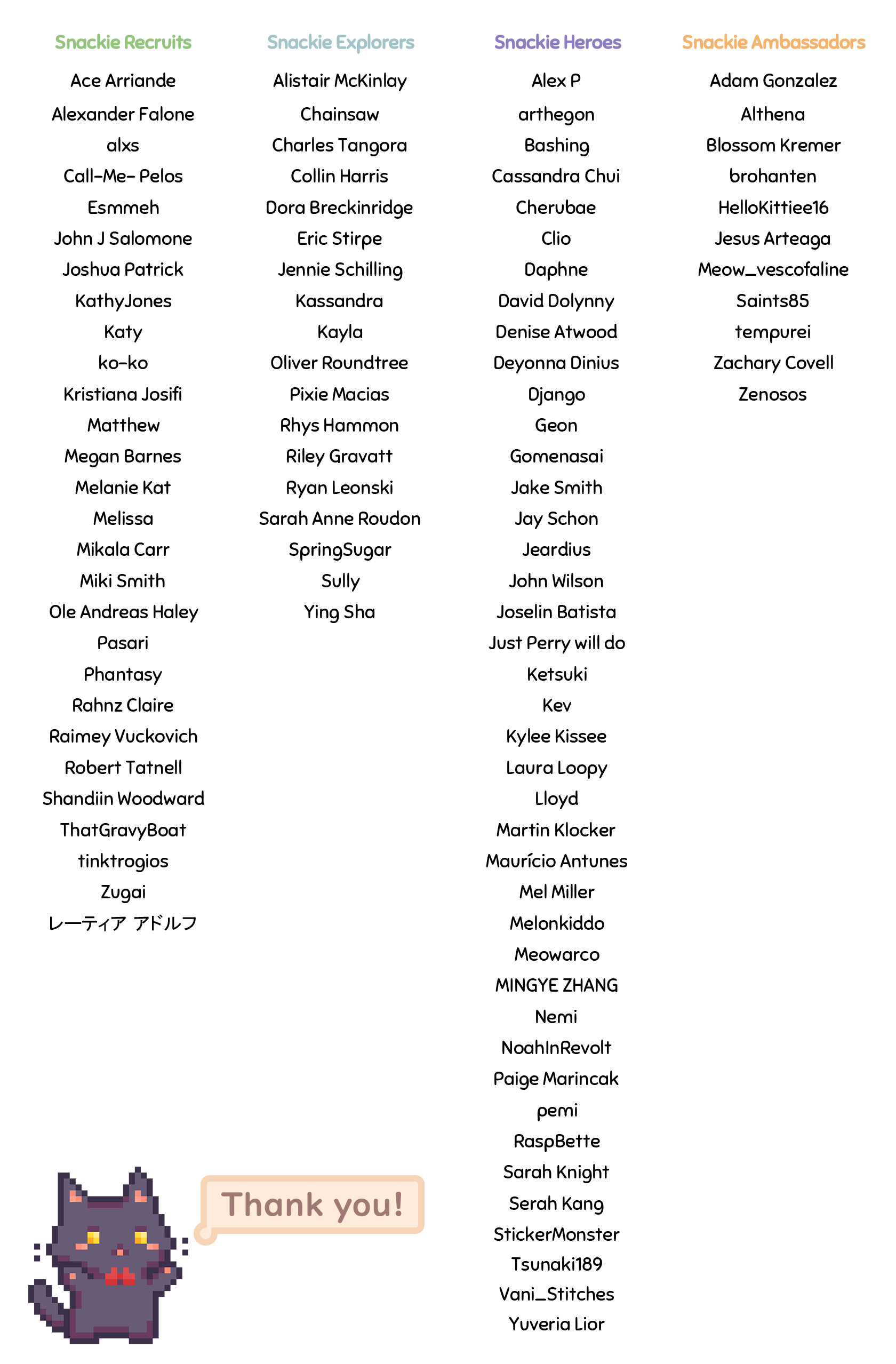